Mayo believes that art can have an impact on people and can help initiate dialogue.

When Zahid Mayo was studying at one of the most notable art colleges in the country, the National College of Arts (NCA) Lahore, he was a square peg in a round hole. Mayo had dreamed of studying there since he was a teenager and finally managed to gain admission in 2008. But, having come from a small village near Gujranwala, he felt alienated in his new surroundings. His fellow students with their impeccable English and urban ways made him feel like he will always be an outsider. But then again, Mayo was not one to take such things sitting down, and he transferred his fire into his art.

As he wandered around the city, Mayo began to include images of those densely packed Lahore crowds into his paintings since the crowds allowed him to just blend in and get away as a faceless, nameless observer. This exercise not only helped improve his skills but also helped evolve his artistic expression into a unique one. In 2013, right before he graduated, he set up his thesis display on the roof of the campus building, away from the walls of the gallery, where the rest of his class was displaying their work. That roof was where he had spent most of his time in college and that was where he believed his art belonged. The jury was reluctant to come up to see his work till he started breaking and burning his canvases one by one. Stories of Mayo’s eccentricities have now become part of NCA folklore, but his beginnings were very humble. He says,

“I had a really good time at my primary school. It was a small two-room building with a tree. We used to take rags from home to sit on. Three or four teachers were ‘katibs’ (calligraphers) and that is where my training started. I started with calligraphy but was soon also drawing as I was a natural at it. My teachers encouraged me and I think what I learnt there was something really precious and it has stayed with me to this date.” Mayo comes from a family of landless contract farmers. In his village and the neighbouring town, every other house had a katib or calligrapher. These katibs, once in great demand, found themselves out of jobs once creating calligraphy on computers became more popular. Mayo was trained as a child to write with a bamboo qalam (pen) on a takhti (board) and was always praised for his beautiful handwriting. Therefore, unsurprisingly, he was quite miserable when his parents forced him to study computer studies in the hopes of a better future.

After passing his matriculation, he spent a year doing almost nothing before he decided to pack his bags and travel to Lahore to join NCA, a college he had heard about from an older boy in the village. To his family’s relief, he did not ask for financial support, but they were sad to see him go. Once in the city, he spent his initial days making whatever money he could by sketching portraits of tourists at the Lahore Fort and other odd jobs which took him around the city. But those experiences would go onto shape his artistic sensibilities, as he recounts,

“I think my initial experiences in Lahore made me want to create art beyond the limits of a canvas. I have a problem with art being confined only to galleries, studios and private collections away from the reach of common people. Art should not belong to only those who can afford it, especially since such people do not always appreciate it.”

Instead, Mayo prefers to paint on walls, trees, rocks, various pieces of scrap and sometimes even on trains.

“I knew about this abandoned train carriage parked on a dysfunctional track near Lahore Cantonment’s railway station. I thought of turning it into a safe space for children from the nearby katchi abadi (illegal settlement) to practice art. I gathered a few friends and we spent hours cleaning the space and I did some calligraphy on its exterior as well. When we were about to finish, the police raided the carriage and we ended up spending a couple of hours in the hawalat (jail).” 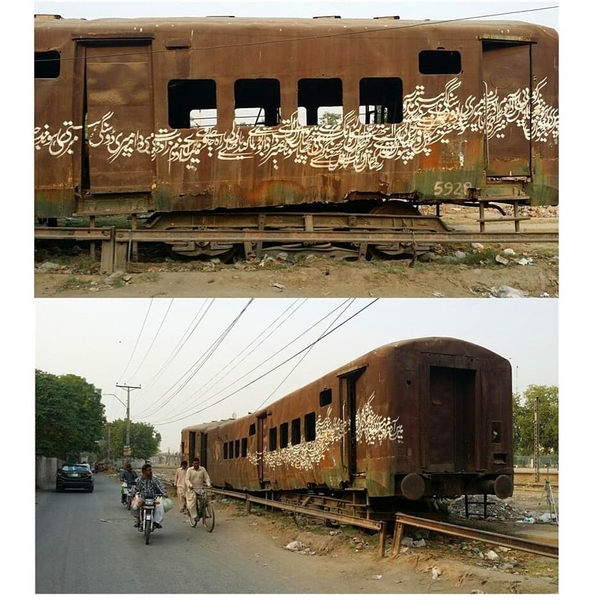 Painting in public was more of a social experiment for Mayo as he wanted people to get inquisitive and ask him about his art. He once painted Ustad Daman’s poetry on a wall of inner Lahore. Even people who had lived in the area for generations had never seen a project like this before. Mayo says,

“Women from the neighbourhood would come and talk to me while the children giggled and observed from a distance. I also experimented by painting the same poetry in Gurmukhi, a language that I spent some time learning, as an homage to the people that had migrated from the walled city of Lahore. That is when the situation became a bit tense as people started getting agitated by this text that they could not understand, which is why I had to leave that poem halfway.”

That effort was not lost though and many months later a Sikh from India got in touch with Mayo to appreciate the incomplete verse in Gurmukhi. He had come across the wall while on a pilgrimage in Lahore and was impressed enough to make a video and share it on the internet.

“Art can initiate a dialogue, isn’t that the idea? I was disappointed when they restored the murals on the walls of Karachi Press Club after they were vandalised. Painting portraits of the city’s heroes was a statement by the artists but when the faces were blackened, it started a dialogue, which the artists should have continued.” A 90-foot long, concrete boundary wall of the French Embassy in Islamabad features a mural that Mayo and his friends painted. The mural incorporates some verses of Iqbal along with the words of Victor Hugo, which Mayo managed to juxtapose through the help of the French ambassador. Mayo thinks that even though his art in public spaces may wither over the years but it will never be lost as it will be etched on the conscience of people.

“I think many times the process of art creation in public spaces and how it has the power to involve people is much more important than the art itself.”

So with feverish intensity, Mayo continues to paint on nonconforming surfaces and in atypical surroundings. His calligraphy extends beyond flat surfaces into curvatures and trail off of canvases onto walls. What surface Mayo’s work ends up on is decided very organically, with the surface sometimes dictating what he paints on it and other times his ideas inspire a hunt for the surface they can be executed on.

“Every artwork has its own requirements and for my practice, I cannot act a certain way to fit the rules defined by society. I am, what I am. Artists should be honest with themselves without the fear of judgment. Honesty is the basic prerequisite for practicing any art form, otherwise its magic fades away with time.” Mayo was tickled when a few people got in touch with him and said they had seen his work at the Lahore Biennale even though he had not been part of it and was in Karachi at that time. The people were not wrong though, as his calligraphic work is prominently displayed on tree trunks at Jinnah Garden but it was done a long time ago, even before the biennale culture came to Pakistan. Mayo wants to continue experimenting with different mediums and subjects. At the heart of his art philosophy lies the belief that his work should be accessible to as many people as possible and not just the individual that owns it.

“My friends and I have also started a clothing and tote bag line by the name of Sazish (conspiracy). My calligraphy adorns the pieces, making my art mobile and accessible to many people even when a single person owns the shirt or bag. I like to continuously reinvent myself, break rules, push boundaries and challenge norms. I want every exhibition of mine to be different from my previous work. May be I will try video art next. I am also experimenting with my subjects for my upcoming exhibition. Life is so much more fun this way.”

All photos courtesy of Zahid Mayo

A$AP Rocky charged for pulling a gun on former friend