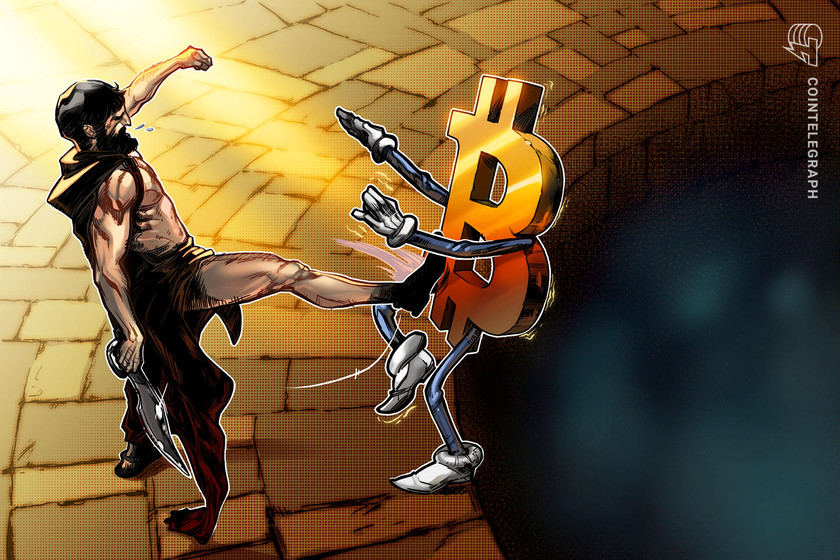 The U.S. Federal Reserve’s inflation “sledgehammer” is about to batter the prices of Bitcoin (BTC) and Ether (ETH) down even further, before reaching back to new all-time highs in 2025, according to Bloomberg analyst Mike McGlone.

Ahead of the latest Fed interest rate hike to be announced this week, the market is expecting a minimum of a 75-basis-point increase, however some fear it could be as high as 100 basis points — which would represent the biggest rate hike in 40 years.

Speaking with financial news outlet Kitco News on Sept. 17, McGlone, the Senior Commodity Strategist at Bloomberg Intelligence, suggested that further market carnage is on the cards for BTC, ETH and the broader crypto sector, as Fed’s actions will continue to dampen investor sentiment.

“We have to turn over to the macro big picture and what’s been pressuring cryptos this year and that is the Fed sledgehammer.”

ETH’s 20% drop in particular has been a cause of discussion, as the price of the asset has tanked since the highly anticipated and long awaited Merge went through on Sept. 15.

With the major network upgrade essentially resulting in a “buy the rumor, sell the news event,” moving forward McGlone thinks that ETH might drop to “$1,000, or even get a bit lower” given how hawkish the Fed has been, and will continue to be, this year.

“I’m afraid [The Merge] got too hyped,” said McGlone, adding that ETH’s price decline is “within a significant macroeconomic broad-based bear market for all risk assets.”

During the interview, McGlone even went as far as to predict that the latest rate hike could cause a crash across assets that is worse than the 2008 housing bubble meltdown.

“The Fed started easing in 2007, and then they added massive liquidity. They cannot do that anymore,” he added.

There is of course a pinch of hopium, however, as McGlone also tipped BTC to strongly rebound and hit a new all time high of $100,000 by 2025, while he is very bullish on ETH long-term due to future potential for institutional adoption.

Related: The market isn’t surging anytime soon — so get used to dark times

Looking elsewhere, other analysts and experts have shared a similar amount of short-term pessimism to McGlone. Speaking to the New York Times on Sept. 19, Kristina Hooper, the chief global market strategist at Invesco noted the latest Fed announcement will be pivotal because of “what it could mean for the direction of the stock market for the rest of the year.”

“The Fed has been the key driver of the stock market this year, and it has been mostly bad,” she said.

While Ark Invest CEO Cathie Wood also added to her warning from last week that the Fed’s continued hikes could instead end up causing deflation, stating in a Sept. 18 tweet that the “Fed is solving supply chain issues by crushing demand and, in my view, unleashing deflation, setting it up for a major pivot.”

This inflation started fewer than two years ago with COVID and supply chain bottlenecks, exacerbated by Russia’s invasion of Ukraine this year. The Fed is solving supply chain issues by crushing demand and, in my view, unleashing deflation, setting it up for a major pivot.